The drought seemed endless and the hot, dry winds unremitting. Would we ever see rain ever again? The prospect of summer with even more hot, dry weather was becoming a nightmare in prospect. Then just as I sat down to write this, the sky turned black and thunder rumbled. But of course it often happens here that we get a storm without rain, so no need to get excited. But then the plink plink plink of rain drops … a sound that I had almost forgotten. Yes, at last, a really decent dollop of rain.

My earliest memory of the cinema is the Disney cartoon ‘Bambi’. Some people remember the frightening bits – like when the hunters arrive – but for me it was the song Little April Shower.

We certainly needed this rain. I had – against all my own advice – planted some shrubs in early April. Mercifully they are quite near to the house so I can keep an eye on them and run out and water whenever they show signs of stress. It is far from ideal but I had ordered the plants in October and the vivaio – despite repeated promises – never turned up with them. In desperation I went and collected them and planted despite it being so late.

I am trying to water with a can so that I can gauge how much I give each plant: with a hose it is easy to just sprinkle the surface and not get soaking down to the roots. I am also trying not to water more than once per week so they can get used to seeking out water themselves. So far they are all surviving but it has been touch and go at times. 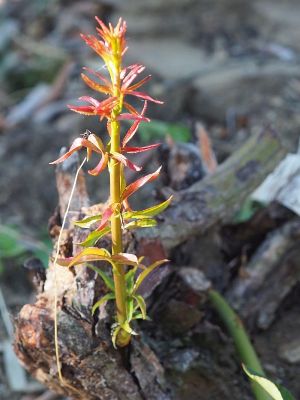 I was very touched that so many readers told me how upset and sympathetic they when I wrote last month about the senseless destruction of my Rosa banksia lutescens.
My super new gardener has very carefully and kindly trimmed the remaining wood of the rose (which had been slashed to ground level) and made a ‘saucer’ of earth around it so it’s easier to water thoroughly. We then gave it a feed of TopRose and watered it deeply every ten days or so.
And lo and behold … a new shoot is emerging from the base. This rose is reproduced as cuttings with its own roots rather than grafted onto a rootstock. This means that the rose shoot is ‘true’ to the original plant. At least I hope so: the form of the leaves certainly looks like the parent.

By the way: the type of rootstock dictates the growth of the grafted rose, and they are not all the same. The rose nursery at Assisi, ‘Quando Fioriranno le Rose’, told me that the rootstock used for David Austin roses here in Italy is different from that in UK so their climbers are noticeably taller. Why not drop round to their beautiful show gardens and see for yourselves? 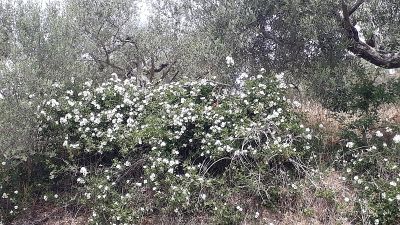 Rosa sempervirens by the roadside in Panicale

A wild rose but no less valuable for that. This rose Rosa sempervirens comes into bloom very late and is called the ‘Rosa di San Giovanni’ because it is supposed to flower on the saint’s day, 24 June (but I doubt that it will still be blooming here after such hot dry weather). 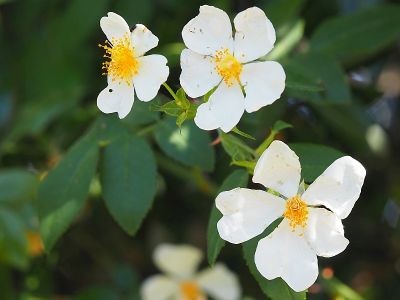 Rosa sempervirens
Not to be confused with the upright, pink-flowered Dog Rose (Rosa canina) that arrives early in May, the sempervirens is a slender branched evergreen, as the name suggests. It often grows low on banks and hedgerows but it can also scramble through the trees of the bosco. This year has been an especially good one and the simple white flowers are garlanding the roadsides.