A bit about the gardener

I must start with the confession that I am not a professional gardener and I have not had any botanical training: I am in fact a chartered civil engineer. During the course of twenty years I have learned by observing my garden and my – often mistaken – efforts to make it flourish here in Umbria.

My ideas for how to cope with a dry garden have evolved slowly. In the beginning I tried irrigating plants but many just curled up and died: fungal infection seemed to kill off as many as did drought.

Behind the house was a heap of rubble left from when the previous owners did building work in the 1960s. It was impossible to get a fork into the jumble of old concrete, bricks and steel. One day when I was at the local vivaio looking for more plants to commit to certain death, I spotted a collection of small plants in tiny square pots growing from cuttings. These were of plants that grow well in our area – cistus, teucrium, phlomis … I bought dozens and returning home squeezed them into the crevices in the rubble. By the following year they had mostly flourished. Result! 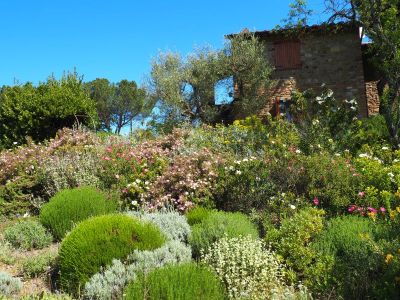 Shrubs growing on a heap of rubble

Subsequently I discovered the work of Olivier Filippi who is the probably the world expert in plants for the dry garden and his book ‘The Dry Gardening Handbook’ has changed my (gardening) life.

I decided then to build a natural pond rather than a conventional swimming pool. That was just the beginning: the grounds surrounding the pond were a sea of mud. Sticking to the principles of a garden that is in harmony with the landscape and requires no irrigation, I put in more than a thousand plants in the first winter - and lost only ten. 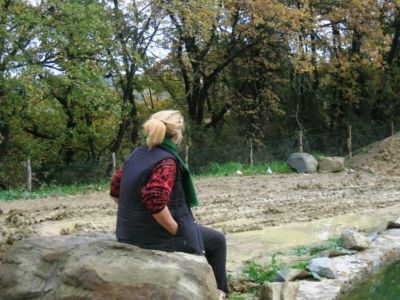 In the beginning - a sea of mud

I believe that what has resulted is a garden that is self-sustaining and ecological and which provides interest and sanctuary in every month of the year, despite the challenging conditions. I do hope that you agree. 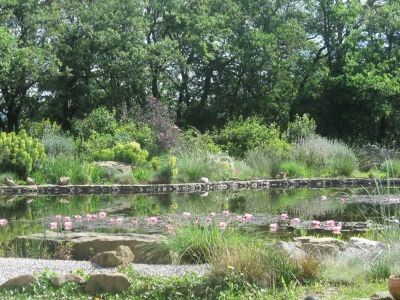 The same area of the garden three years later

As an introduction to my approach to the garden in Umbria here is a talk I gave in Castiglione del Lago a couple of years ago. 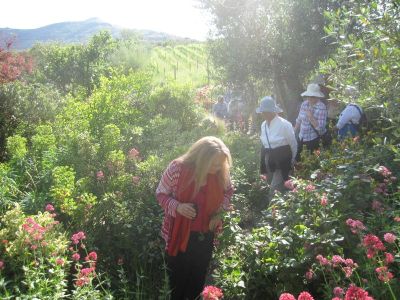 I have occasionally opened the garden to groups of visitors, but this article will explain why I don’t do this routinely.