The weather is warming up and the rain of April has triggered a rush of growth. Round here they say “Aprile, ogni goccia un barile” (Every drop of rain in April means a barrel [of wine]). In fact, I can almost hear the sound of plants bursting out of the ground. Weeds.

Time to re-think the whole question of weeds.

The idea that a weed is ‘plant in the wrong place’ is true enough but it doesn’t take us very far. What really constitutes a weed?*

Those of you old enough to remember ‘Bill and Ben the Flower Pot Men’ will no doubt also recall with affection Little Weed - who I now realise was not so little and maybe not even a weed.  I hear that the BBC is considering a remake of the programme where Little Weed will get proper lines rather than just "Weeeeeed". Then we would find out who she really is … #WeedToo. 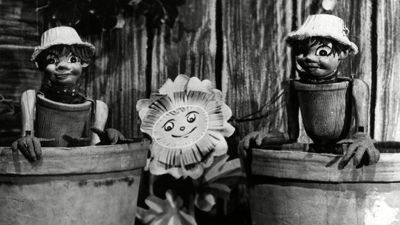 Bill and Ben with Little Weed

A professional gardener tells me he cultivates a particular plant for one client (Oxalis rubra) and eradicates the same plant for a different client. They can’t both be right. 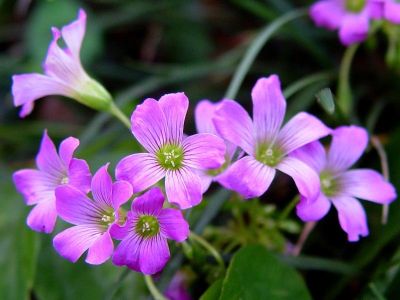 Weeds are immensely successful and have learned all sorts of tricks to survive. Have you noticed how weeds often resemble the plant they are trying to crowd out?

We owe weeds a debt of gratitude for the way they have continued to bring green and life sustaining presence wherever there is barrenness in our world. Poppies on the battlefield; rosebay willow herb on the bombsite; brambles and docks on the industrial wasteland. Every forgotten corner that weeds have populated is a contribution to life on earth.

Richard Mabey in his fascinating book “Weeds: The Story of Outlaw Plants” suggests that weeds and wild flowers, “those ruthless gate crashers of civilization" are really part of nature's secret immune system, rushing in to repair our damaged planet.

Many ‘weeds’ or wildflowers are already in bloom, providing nectar for bees; field marigolds and dandelions make a carpet of gold. Nettles support several of our more splendid butterflies. 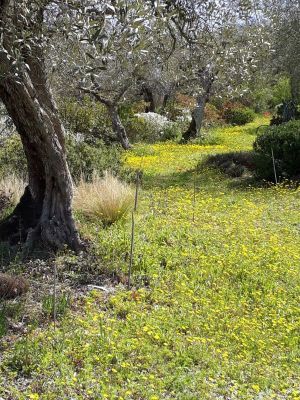 Apart from being clever, some plants (not all of them ‘weeds’) are positively aggressive and display Allelopathy - producing biochemical substances that prevent other plants from setting seed or even growing at all in their vicinity. Certain varieties of Cistus, Lavenders, Oleanders, Phlomis, Rosemarycan do this, which is worth considering when planning a planting scheme.

Looking out at the garden I see a patch of acid yellow flowers: oilseed rape blown in from a farmer’s field. Now that’s what I call a weed.

I admit that we don’t always want ‘weeds’ running riot amongst our treasured plants. Indeed, a monoculture of weeds is to be avoided. The best way to deal with them is to get out there with the trowel right now: there is no time to waste.

Weed killers should be avoided, if possible, but some weeds such as ground elder may need drastic action. ‘Round Up’ is a bit controversial but it is supposed to become ineffective the moment it touches the soil.

‘Natural’ weed killers such as vinegar or salt could be an alternative, but ‘natural’ does not necessarily mean harmless: the Romans supposedly sowed the fields of defeated Carthage with salt so they could never grow crops again. Consider ‘Roundup Gel’ which is applied with a brush to individual leaves without risk of splashing onto other plants or soil.

Supressing weeds ought to be an answer: gravel and mulch can work but need to exclude light completely or the weeds will still grow. Seeds of weeds will also take root on the surface nonetheless.

* Rory Sutherland says that “A flower is a weed with an advertising budget”.

The photo at the top of this page shows self-seeded field poppies - flower or weed?