When did it last rain? Well we did have some the other day and even hail and snow, but as far as I can remember it has been bone dry from New Year until the end of March. Or that’s how I remember it. Indeed, looking out across Lake Trasimeno I can see the shores of the islands high above the water line: surely another sign that we have had little or no rain.

Ian Robertson, my rainfall-recording guru, assures me that compared with the past 20 years this three month period January – March in fact got 75% of the average. But during the same period in 2019 we only got 20%. I don’t recall that! But then I seem to have a pandemic-shaped hole in my memory and events before then are often obscured. Weird.

The level of water in Lake Trasimeno has been a cause for concern since ancient times - both too high and too low. There are no rivers flowing into or out of the Lake, so it is difficult to maintain the right level. The water level varies with rainfall during the cycles of climatic conditions: this paper by researchers at Perugia University explains how the lake was too high during the ancient Roman period and again in the 15th - 19th centuries.

Roman Senator Silius Italicus wrote his epic poem ‘Punica’ in the first century AD about the Punic Wars and Book V:1-23 describes how Trasimeno came to be so named. Not only was the water of the lake very deep, such that nymph Agilla could drag Prince Trasimene into its depths, but when Hannibal arrives in 217 BC the area is described as being ‘surrounded by deep mud’ which he used to military advantage against Flaminius. In the early Mediaeval period the lake dried out considerably and villages built on the shores were later lost when waters rose again. 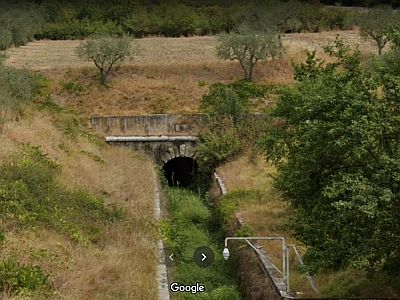 Overflow channel at San Savino where it goes underground

To control the water levels, the Romans created an overflow channel from San Saviano to the Tiber, and this was rebuilt in the 15 century and renewed in the 19 century. In the 20 century (see graph) falling water levels meant that drastic action had to be taken to prevent a total drying out of the Lake in the 1950s. Whilst this was effective at the time, a study by the University of Perugia published in February forecasts that if the current trend continues then Lake Trasimeno will disappear by the end of this century. Umbra Acque are currently constructing a pipeline to bring in 15 million m3 water per annum from a dam in Valfabbrica, northeast of Perugia.

Why does this matter to us gardeners in Castiglione? Firstly, we rely on Lake Trasimeno for so much of our local environment - also recreation and visual delight. If the water level drops low for too long then the lake will become a swamp and not only will that mean (even greater) infestations of insects but overall the ecosystem will be putrid. The migrating bird populations that rely on Trasimeno as a stopping off point will be deterred. A downward spiral of death and decay.

The lake is not only affected by how much water arrives as rain but also the amount of water that is extracted for agriculture. The quality of the water that runs off the surrounding farm land is reported to be good but in reality the level of nitrates that exacerbate the growth of algae in the lake are too high. When we had a well drilled (down to 120m depth) the analysis of the aquifer water revealed unacceptably high levels of nitrates - such that it was rendered unpotable by humans.

So we gardeners need to do what we can to limit our use of water and to not put fertiliser on the garden unnecessarily.

When you are out in the garden this month - cutting back dead wood from roses and shrubs, I hope - do please resist the temptation to put fertiliser on everything. Not only will it encourage lush, quick growth that will not resist the summer drought but it will run off into the local aquifer and end up creating algae in the Lake. Compost and mulch are fine – they break down more slowly and are taken up by the plants’ own systems.