It’s that time of year again. My phone keeps ringing with yet another courier who can’t find the house. Did I really order all this stuff? Boxes of plants and bulbs are flooding in, and I can’t seem to remember where I was going to put it all, nor indeed how I am ever going to find the strength plant them.

But plant them I must and no putting it off. On the brink of despair, I call on the heavens for help and strength. But who should I call? Who is the Patron Saint of Gardeners? There are several to choose from.

An Irish saint from the 7th century, Fiachre became an authority on healing herbs and plants. So great was his fame that he moved to France to escape his followers (there’s nothing new under the sun!). When he established his monastery, he was allowed as much land as he could entrench in one day. Fiacre turned up the earth with the end of his staff, toppling trees and uprooting briers and weeds. I could do to borrow that staff for my garden …

But St Fiachre is also known to have been something of a misogynist; he did not allow women anywhere near his hermitage and chapel. As a result, he is often called upon to cure venereal disease. I don’t think he is the saint for me. 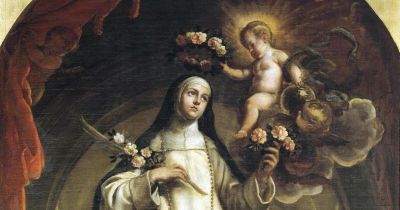 Her great beauty gave this saint the name Rose. She lived in Peru in the 16th century and spent her life of piety indulging in what today we would term self-harm, often trying to mutilate that beauty. She is patron of gardeners and florists because of her name and nothing to do with gardening.

Let’s look for a female patron saint with whom there is at least some connection with flowers. 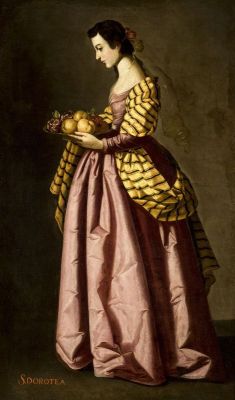 An early 4th century saint, Dorothy is said to have been martyred by Diocletian. On her way to the place of execution the pagan lawyer Theophilus said to her in mockery: "Bride of Christ, send me some fruits from your bridegroom's garden." Before she was executed, she sent him, by a six-year-old boy, her headdress which was found to be filled with a heavenly fragrance of roses and fruits. Theophilus at once confessed himself a Christian, was put on the rack, and suffered death.

I would prefer a saint who has some ‘hands on’ experience of gardening. St Phocas sounds promising … 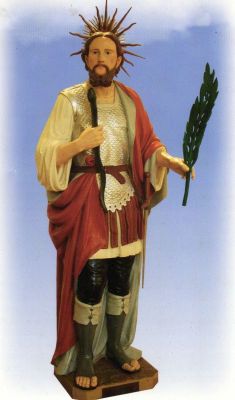 In third century Sinope on the Black Sea, Phocas lived by cultivating a garden and used his crops to feed the poor and aid persecuted Christians. During the persecutions of Diocletian, he provided hospitality to the soldiers who were sent to execute him. The soldiers, not knowing that their host was their intended victim, agreed to his hospitality. As the soldiers slept, Phocas dug his own grave and prayed. In the morning, when the soldiers awoke, Phocas revealed his identity. The soldiers hesitated and offered to report to their commander that their search had been fruitless. Phocas refused this offer and bared his neck. He was then decapitated and buried in the grave that he had dug for himself.

Not sure about digging my own grave. Surely there must be a saint who is inspirational without requiring such self-sacrifice? 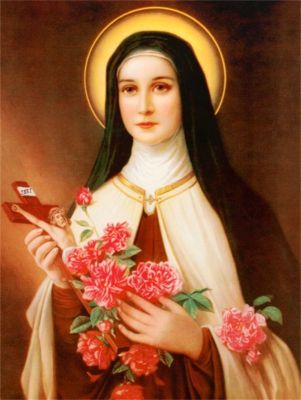 Patron of florists, she lived in the late 19th century. A French Carmelite nun who is widely venerated in modern times. She is popularly known as "The Little Flower of Jesus" and died at the age of 24, from tuberculosis.

But in the end I feel myself drawn most closely to our two local saints, Francis and Claire, who evoke such strong feelings for roses and – better still – whose Assisi gardens we can actually visit and enjoy. Real ‘gardeners’ in spirit who I feel sure to call upon in the coming days. 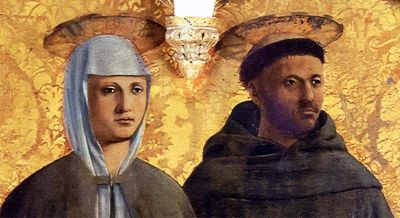 Umbria is known as the ‘Land of Saints’ (Terra dei Santi). Two Umbrian saints have particular connections with roses: the patron saint of Italy, San Francesco, with his beloved friend, Santa Chiara. They founded the Orders of Franciscans and Poor Claires at Assisi in 1210.

St Francis spent much of his ministry at the Convento Porziuncola in Santa Maria degli Angeli, Assisi. Despite his saintliness, Francis struggled at times with temptation. It is said that in an attempt to rid himself of temptation he threw himself onto a rose bush, but the rose transformed itself into a thornless variety so as not to hurt him. 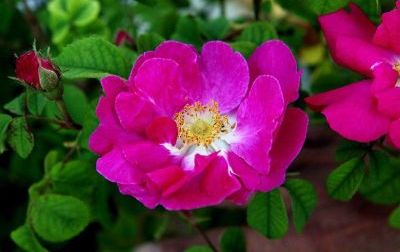 The rose still exists at the Convent and is unique, named Rosa Canina Assisiensis. It can be seen there in the small cortile recently replanted by the vivaio ‘Quando Fioriranno le Rose’.
Attempts to grow this little rose outside the Convent have failed – it always reverts to its thorny ancestor. Only one example exists and that can be seen at the vivaio, a gift from the Frati Minori di San Francesco - but it cannot be purchased.

The name of the vivaio comes from a story about St Francis. He went to visit Santa Chiara in her convent up in Assisi town during winter with snow on the ground. On leaving she asked him when he would return. His reply was ‘Quando fioriranno le rose’ (When the roses will be in bloom). Upon which roses grew up out of the snow and came into bloom and Santa Chiara presented him with a bouquet. 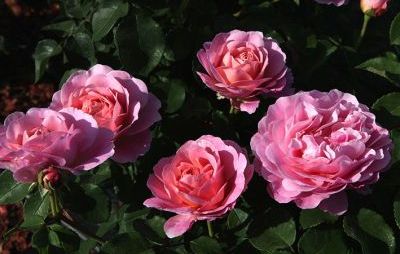 David Austin has dedicated one of his New English Roses to “Saints Chiara e Francesco” which can been seen at the vivaio.

The illustrations of saints have been sourced from Wikipedia