Gravel as a mulch to protect the roots of plants from heat and to conserve moisture is probably the most effective way to create a dry garden in Umbria. It is not for everyone or everywhere, but done correctly the technique produces very attractive results.

The first problem is finding nice gravel: ideally you want rounded river-washed pebbles with soft colours. Often the only type on offer is angular, crushed stone in white or nasty grey. I suggest you try Pacelli Piante at the Terontola interchange on the Perugia-Betolle superstrada.

The next consideration is the design: too much gravel in high summer can be dazzling and will make the house seem baked hotter rather than the cooling effect we seek in a garden. I decided to make a gravel area in-front of the house and along the side, where cars could drive across if necessary.

Much of this area was compacted rubble left over from building works in the 1960s. 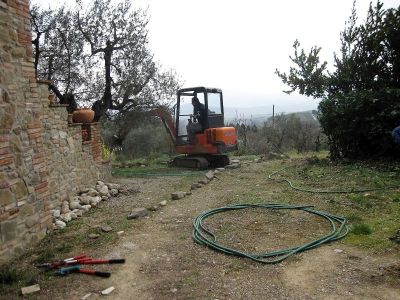 I mapped out the areas that would contain plants using lengths of hose and dug out the - rather horrible - top layer. Proper top soil was put into these areas. 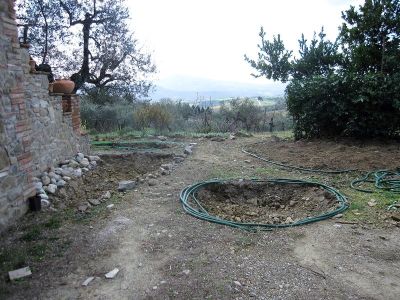 A base layer was spread over everywhere except the planting areas. This was a sort of sand, breccia and cement dry-mix that would discourage weeds and provide stability where cars might go. This is very important – just dumping a load of gravel down is rarely sufficient to block light and allows weeds to grow. Putting down a fabric base layer can work but the gravel layer tends to get pushed aside by vehicle wheels and doesn’t stay looking good for long. 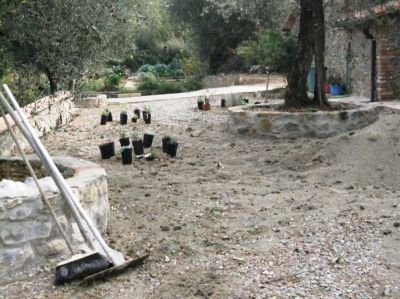 The little plants were then put in their designated positions. 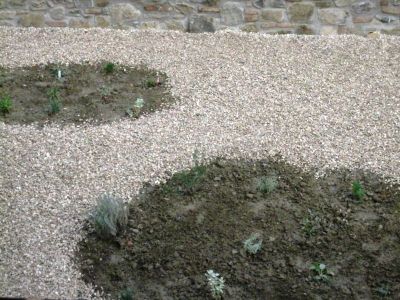 Copious quantities of gravel were spread over the entire area being careful not to swamp the little plants. Groups of large stones were used to ‘soften’ some areas where the gravel meets the angular structures of the house and paving. 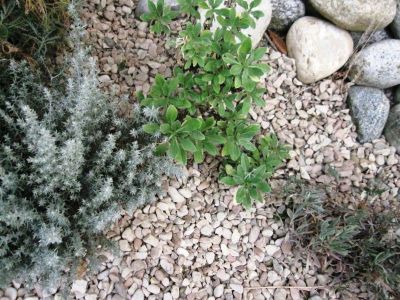 Gravel around the plants 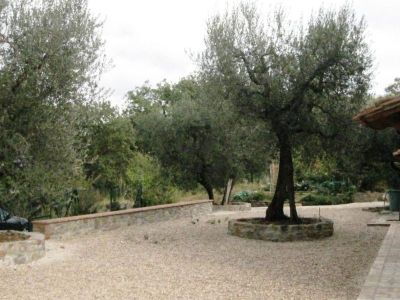 The little plants really took off and within 18 months the garden was already looking abundant and attractive. 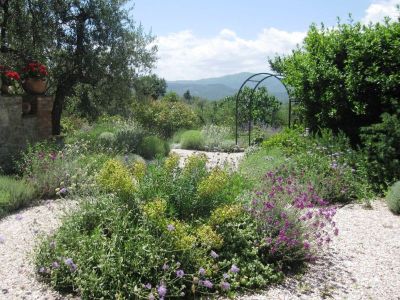 Eighteen months later in the side gravel garden

And now after ten years it is still looking good. 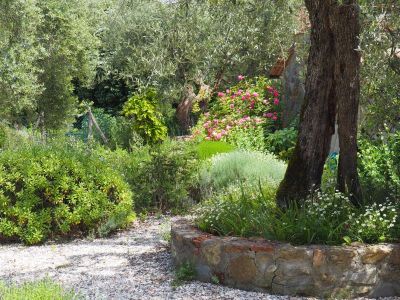 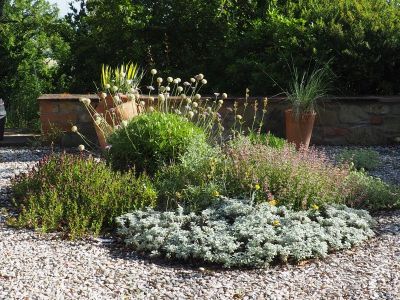 The gravel garden needs very little maintenance - no watering at all ever - just trimming some of the shrubs in autumn. I do keep an eye out for weeds that occasionally self-seed on the surface of the gravel, but they are easy to pull out. More interesting, though, is that many of the shrubs also set seed on the gravel, so I have a source of seedlings which I can grow on for use elsewhere in the garden.