Plant of the Month - December

The darkest month, when we see the shortest day at the winter solstice on 21 December. But we have many brightly coloured berries and even some flowers to carry us through.

Bowls of prepared hyacinth and daffoldil 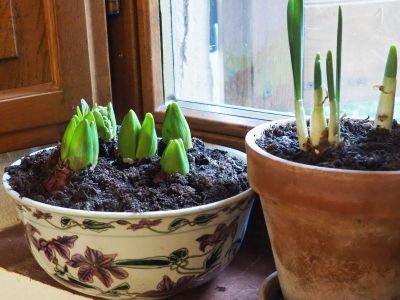 Bowls of prepared hyacinth and daffoldil

Rules for Visiting is a novel about a gardener who re-discovers old friends. In her list of ten rules for visiting, at number 2 is ‘Take a gift’. (Number 1 is ‘Do not arrive telling stories about the difficulties of your trip’). At this time of year, giving is uppermost in our minds even when visiting might not be possible. How about giving a pot of indoors bulbs? This will be a gift that grows and blooms even when you are not there in person. 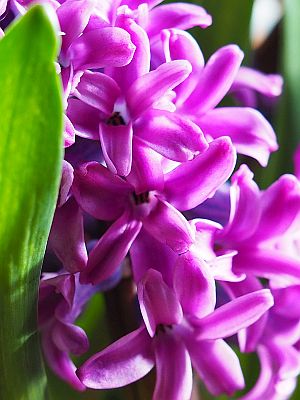 It may be a bit late to get hyacinths started but how about some less common bulbs? Small bulbs like crocus, Anemone blanda and Iris reticulata do well in containers. No need to stick to terracotta plant pots: try putting the bulbs on top of a glass filled with stones and water and you will be fascinated to watch them growing. Even old tin cans can look rather stylish. 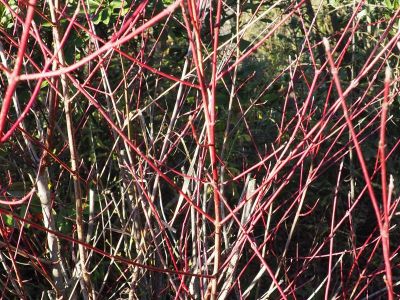 Dog wood. Cornus sanguinea is a native deciduous shrub which is valuable not only for its white flowers in spring followed by black berries but also the attractive red stems after leaf-fall in autumn. Grows to around 2m high and spreads slowly. Resistant to drought and cold. Also useful is another native dog wood Cornus mas which has small yellow flowers in March followed by red berries. 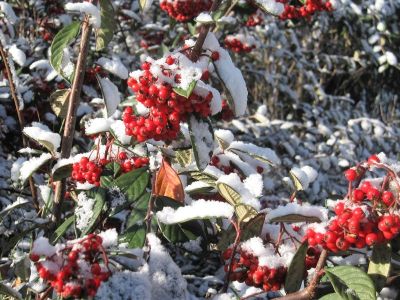 Brilliant red berries on Cotoneaster lacteus make it a ‘go to’ plant for winter decoration. The long pliable stems are elegant and easy to work into a wreath or tall arrangement. Native to China but very much at home here in central Italy, it withstands both drought and cold, and can even take some shade. 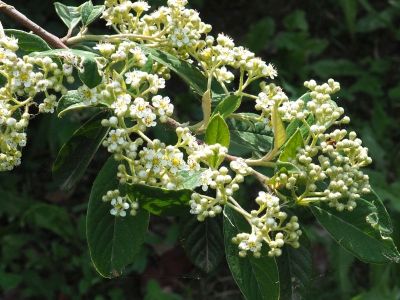 Cotoneaster lacteus flowers in May

There are other varieties of Cotoneaster with a lower growing habit which can be useful in a planting design - for example under trees. But the very low C. horizontalis I really don’t like - it reminds me too much of suburbia. 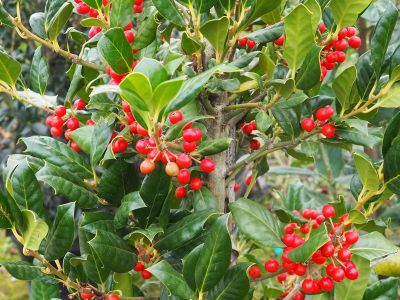 I am not sure that ‘ordinary’ holly (Ilex aquifolium) is all that drought tolerant but there is a small holly bush in my garden which does very well without any watering. It has almost smooth leaves, stays compact and this year has red berries. I suspect it might be a hybrid with the tender Ilex perado which originates in the Azores. Anyway it is most welcome as it cheers up a corner of the garden at a dreary time of year. 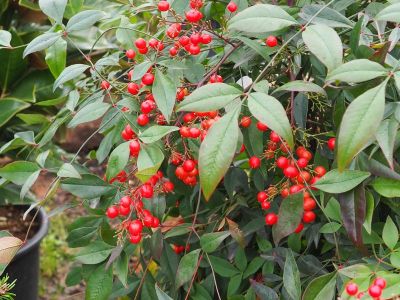 It is with mixed feelings that I suggest you consider a plant which I am usually rather rude about … Nandina (Heavenly Bamboo). My prejudice against this plant is probably more to do with the ways it gets used rather than the plant itself. The row of Nandina domestica at the top of Paciano triggers an outburst from me every time I drive past. But if this plant has a role in life then it is as a cheerful bringer of red berries in mid-winter, often with red foliage too. Indeed, I confess to having actually planted a couple of Nandina in my own garden - in discrete corners - and they look rather nice, especially with their mangy legs covered by other plants. Don’t let me put you off. 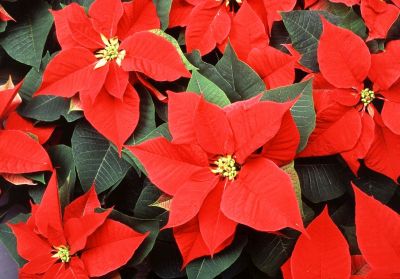 Poinsettia is the favourite flower for Christmas decorations here in Italy, the ‘Stella di Natale’ brightens up any room at this dark time of year. The large colourful flowers of poinsettia are in fact leaves or bracts: the flowers are the tiny yellow berry-like structures at the centre of each leaf bract. Poinsettia’s proper name is Euphorbia pulcherrima and is native to Mexico. Yes, that’s right, a Euphorbia from the same family as all these. Does this matter? Well not really, but it does explain why it is so difficult to get them to survive from one year to the next, or even through the winter holiday season. For some tips on keeping your Poinsettia alive click here. 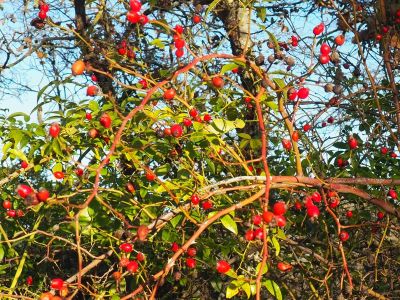 Roses that have not been hybridised will set seed - or hips - which can be most attractive. Native Dog Rose (Rosa canina) grows wild here and can be found by the roadside with its deep red hips. But there are several rambler roses which also bear hips in a range of rich oranges and reds. Just be sure not to ‘dead head’ these types of roses otherwise the hips cannot form.